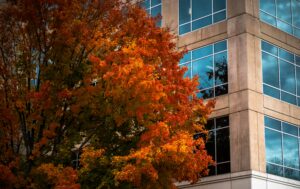 Engineers have spent untold manhours trying to solve issues presented by the Sun. It’s a bit of a catch-22 as well, because the source of light and heat on our planet can at times be overbearing or come up short. Stephen Troese Jr, an expert on energy efficiency within the construction field, knows that there are plenty of options to address the “building envelope.” This all-encompassing term is something that owners and operators of commercial buildings need to be increasingly aware of in the wake of climate issues. An unprecedented heat wave, summer rainfall deluge or record-smashing cold snap can spell disaster if a number of factors haven’t been accounted for. These can include the roof, walls, windows, doors, skylights, insulation and sealing. Stephen Troese Jr, co-founder of LRI Energy Solutions, says that addressing building envelope issues now, before the full weight of winter bears down on much of the U.S., can help with energy costs.

According to an October 2019 winter forecast from the National Oceanic and Atmospheric Administration (NOAA), some regions of the country “could still experience a colder-than-average winter. Wetter-than-average weather is most likely across the Northern Tier of the U.S. during winter, which extends from December through February.” Flooding come the spring is also predicted, with wetter-than-average conditions predicted in “portions of the Northern Plains, Upper Mississippi Valley, the Great Lakes and parts of the Mid-Atlantic and Northeast.”

That’s a huge swath of the country, says Stephen Troese Jr, who is here to explain why addressing the building envelope before inclement weather is so important. A poor seal or compromised part of insulation that’s leaking heat or air-conditioned air can add up over time. A window or door that was installed improperly can do much more than let a draft of air in; it can cause a leak that contributes to structural damages over time. Some of these issues may be invisible to the naked eye – except when utility bills come due. According to Stephen Troese Jr, a skilled team of inspectors with diagnostic tools, blower door and infrared thermography technology in tow can conduct an audit of the building envelope. This process will then pinpoint where there’s room for improvement. A path forward, as identified by the LRI Energy Solutions team, would help building managers seal any leaks, make improvements to insulation and generally maximize their energy efficiency.

NOAA’s prediction for the coming four months still leaves a window opportunity to fix structural shortcomings. An industry veteran in this sector, Stephen Troese Jr knows that companies who take the time to address these issues as early as possible stand to gain in the long run.